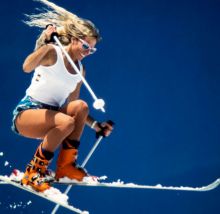 Commanding attention right now in the Tahoe region, and around the country for that matter, is the name change of Squaw Valley/Alpine Meadows ski resort to Palisades Tahoe. The new name eliminates the use of the derogatory word “squaw,” which is considered a racist and sexist slur, and brings the two resort areas together under one name.

Opened in 1949, Squaw Valley resort in the town of Olympic Valley, CA, gained worldwide attention as the site of the 1960 Winter Olympics. Squaw Valley resort was named after the place name of Squaw Valley, but the origins of the valley’s name, dating to the 1850s, are not entirely certain. The resort gained in popularity over the decades and in 2012 merged with nearby Alpine Meadows to boast more than 6,000 skiable acres across the two mountains. The largest skiing complex in the Tahoe region and known for its challenging terrain, the resort is home mountain to dozens of Olympic and World Cup athletes across multiple snow sports.

But despite the resort’s popularity and legendary status, the company leaders had been growing unsettled by the resort’s name and its offensiveness to the local Washoe Tribe, whose ancestral lands are located in Olympic Valley. The resort researched the historical and current usage of the word squaw and held discussions with the local Washoe tribe and determined that indeed the word is considered a slur against Indigenous women.

“No matter the true origin or intent of the name, we do not believe you can honor someone with a name that they clearly consider to be offensive,” the resort says on its website.

Recently appointed Palisades Tahoe President and COO Dee Byrne said she knows the change will be difficult to get used to, but she sees it as an important initiative for the company.

"At the end of the day, ‘squaw’ is a hurtful word, and we are not hurtful people," Byrne said. "It was a change that needed to be made for us to continue to hold our heads high as a leader in our industry and community. We have a well-earned reputation as a progressive resort at the forefront of ski culture, and progress can’t happen without change.” 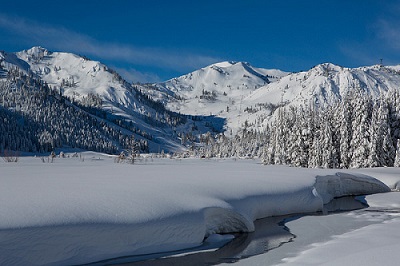 The Washoe Tribe of Nevada and California, who have lived in the area for thousands of years, commended and supported the name change.

Cruz said that Native American communities across the country have been working for years to have the term removed from place names on their ancestral lands.

Working to come up with a new name, the resort spent more than a year conducting surveys and holding focus groups to gather the opinions of local residents, longtime pass holders, athletes, resort employees and members of the local Washoe tribe.

Palisades, which means steep cliffs, refers to the resort’s unique terrain. The logo features the two mountains that make up the resort as well as a majestic eagle, a nod to the important Washoe symbol, the powerful bird that calls Tahoe home and the resort’s free-skiing roots.

The resort has already begun implementing the new name and branding for the 2021-22 season, which opens on November 24, 2021, but the full changeover will take several years. The name Palisades Tahoe will encompass the whole resort, but the resort will use the terms Olympic Valley and Alpine Meadows to refer to the distinct base areas (which will be helpful on directional signage or knowing which base area rentals or lessons are located, for example). The base-area village on the Olympic Valley side, home to more than 50 businesses, will now be known as The Village at Palisades Tahoe. Palisades Tahoe leaders are assisting any local businesses in the village that want to change their name as well.

New names are forthcoming for the Squaw One and Squaw Creek chairlifts, and the Washoe Tribe is leading the efforts to rename Squaw Peak and Squaw Creek.

Palisades Tahoe has also formed a partnership with the Washoe Tribe of Nevada and California to continue to give the tribe a platform to educate the public about their culture and their ancestral lands in the valley. This past summer, the resort launched the Washoe Cultural Tour series, which offered guests a view of the mountains through the eyes of the Washoe people. Palisades Tahoe will install a Washoe exhibit at High Camp, complete with tribal artifacts that show the Washoe way of life that members seek to preserve to this day. The groups are also exploring future programming centered on making skiing more accessible to Washoe Tribe members.

For more information about the name change, including an FAQ, click here. 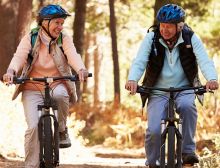 The Magic of the North Shore