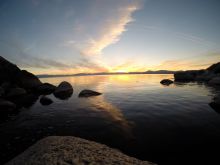 Lake Tahoe has some strangely interesting aspects, her mysterious depths being one. In fact, there are some that say the lake connects to waters beyond.

Our trio of legends continues with our second installment, which ties into stories of the lake's immense depth. This story dates back to the mid-1800s and the rush of mining for silver and gold.

Back in 1858 and 1859 the Virginia City township, located between Reno and Lake Tahoe, became a booming silver mining town with the Comstock Lode that was found beneath the town. This explosion of mining was a huge money maker for the next two decades, bringing in billions of dollars. Among those trying to make it big with silver was San Franciscan Lester Williams.

Weary and tired of prospecting for shiny silver, Williams was known to enjoy vacationing at Lake Tahoe. On one specific occasion, it's said, he was enjoying 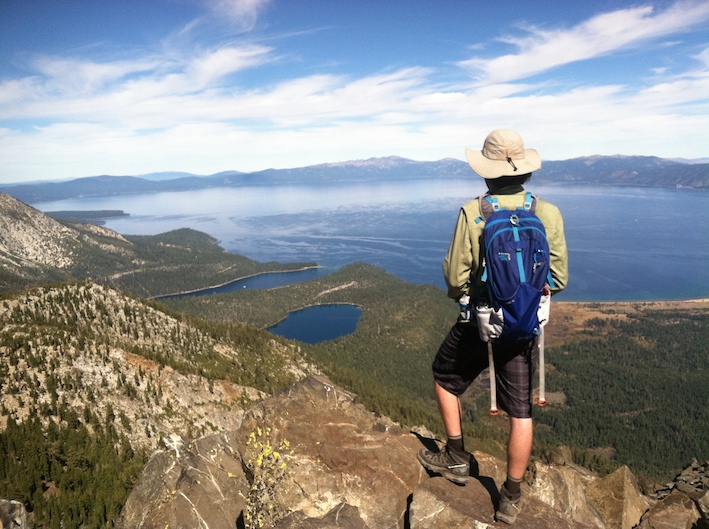 the blissful white sand beaches of Carnelian Bay, favoring the tranquility of fishing off Dollar Point. While waiting for a fish to take bite he noticed that his boat began to circle in a lazy fashion, much like an object would swirl down a drain.

Realizing that his boat was spinning in the same fashion as a whirlpool, he came to believe beyond a doubt that there was a hole in the deep depths of Lake Tahoe, creating a suction. To test his theory, he chose a large board, writing a giant L on the wood to create a way of recognition, and threw the board into the water. To his astonishment the board began to circle faster and faster, only to be devoured by the whirlpool and vanish into the dark azure water of Lake Tahoe.

An Appearance From Nowhere

Williams was befuddled. With hours upon hours vanquished to this subject, he began to realize that with the help of his friend Tom Speed he may be able to bring reason to his theory.

Returning to San Francisco, Williams contacted Speed, letting him know of his findings and theory and consequential wish for his assistance in finding out if this so-called hole was a true entity.

For three restless days the duo scoured maps, land surveys and water-level measurements, attempting to make a connection. And then they struck gold. They discovered a link between Lake Tahoe’s lake level dropping significantly in the same moment that the Comstock Mines —  just down the hill in Virginia City — were filling with water in hopes of finding silver.

To check his theory even further, Williams decided to make certain the only way that seemed pertinent: to become a miner. Joining forces with the mining companies in Virginia City as a pump tender, he gained access to the one place that could prove without a doubt what he believed. Within a couple of days his belief was proven true by the wooden board on which he wrote L showing up, floating in the main sump-pump pond of the silver mine.

Believing this was a sure bet on getting rich quick, Williams returned to San Francisco to gather Speed and to prove that there, indeed, was a whirlpool hole in Lake Tahoe.

Put A Plug In It 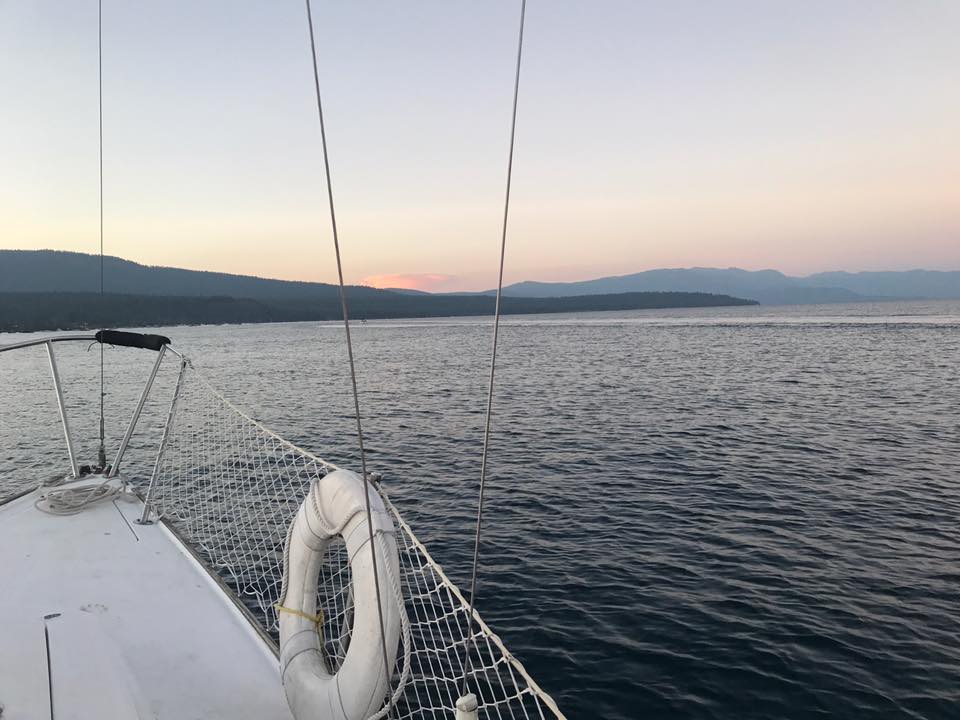 Once back in Lake Tahoe, Williams and Speed hired boat builders to create a one-of-a-kind flat-bottomed fishing boat that was open in the middle and aided with a cabin over the open space. With the boat completed they took aboard two giant crates filled with chains and a windlass as well as a gigantic round of old growth Douglas fir.

Finding the whirlpool again, the two began to work. Anchoring their ship, they used the chain to lower their piece of Douglas fir, of which they had shaped into a cone, in hopes that it would plug the hole. Letting out inch of chain by inch of chain, the two men carefully lowered the huge drain plug into the depths of the lake. As the whirling motion began to take the cone of wood, it all of a sudden sucked it into the hole, fitting it perfectly. Within moments the suctioning whirlpool action of the hole ceased. The two men had plugged the hole!

Back in Virginia City, the Comstock Mines were causing worry as they were continually filling with water, creating havoc for the miners. It was said that if the flooding was to continue the mining would have to cease as the pumps couldn’t withstand the rush of water. This resulted in an immense fear among the miners, investors and stock holders, creating a severe dip in stock prices.

Williams and Speed with their insider knowledge, began to buy up the stocks that people were getting rid of. With all of the stocks now in their hands, people watched as the mine dried out suddenly, allowing a rebirth of the mining and upward skyrocket of stock market share prices. A roller coaster ride ensued, one that would go up and down at the hands of Speed and Williams, making the pair millions of dollars.

The greed-induced yo-yo-ing continued – it is said – until a cold and blustery Thanksgiving Day in 1869. The two went for one last trip in the wintry weather to adjust the levels of the water. But this time their greed would get the best of them.

Their boat was lost to Lake Tahoe. The legend says that a heavy gold chain necklace that Speed happily wore to show off his wealth was caught in the plug chain 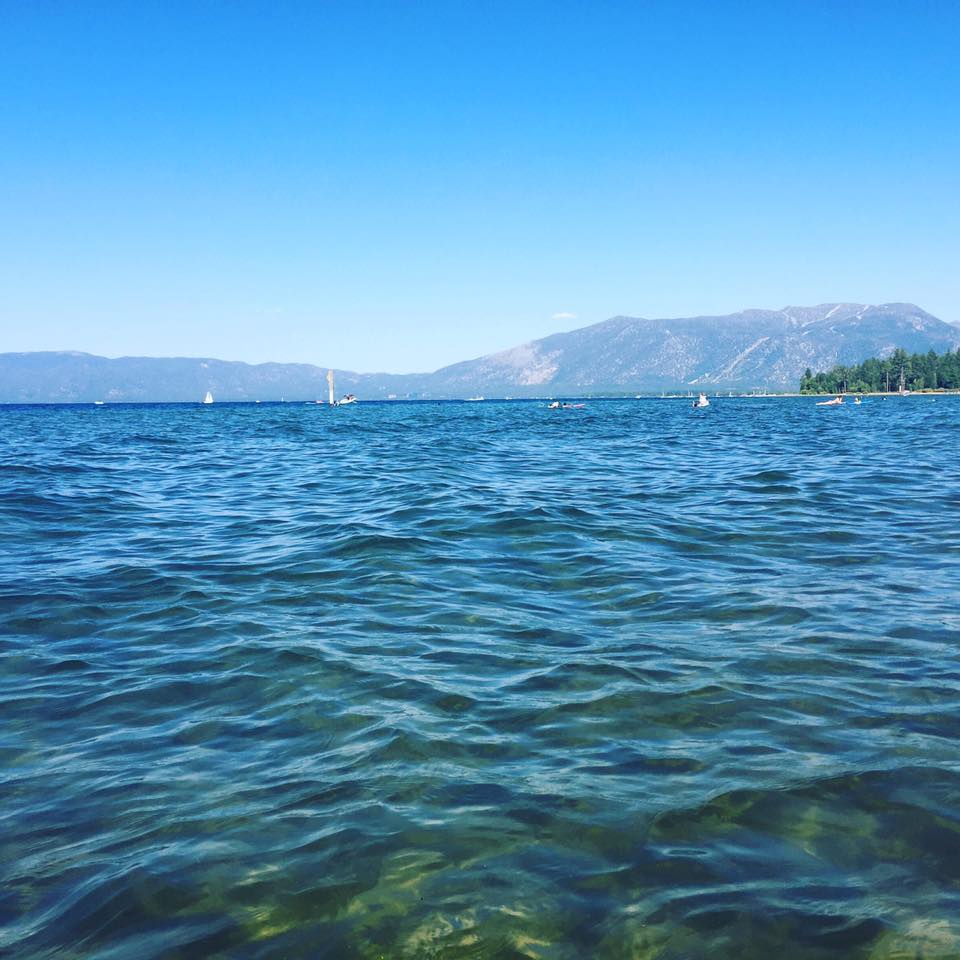 as it was being lowered. Speed fell over board, thrashing violently trying to release himself. Williams fell in after him, attempting to save his friend. The two men were pulled down into the icy grip of Lake Tahoe, captured in their own chain. The suction was so powerful that the men could not escape, drawing them through the hole and then the hole sealing itself with the plug behind them.

Nearly a decade later their unique boat was found battered and beaten upon the sandy shores of East Shore. Upon the deck the windlass was found, but there were no signs of Williams or Speed, nor a chain.

It is said that the plug remains in its place still to this day, located somewhere near the end of Dollar Point.

An original telling of this story can be found in the published writings of David J. Stollery, Jr. in his Tales of Tahoe, written between 1963 and 1969.

$2 Off a Large Pizza

Mention Tahoe.com and receive $2 off a large pizza.