Sierra State Parks FoundationMusic in the Castle with Anne Roos

Music in the Castle With Anne Roos

This Event has no scheduled dates at this time. It last occurred on Saturday, July 24, 2021. 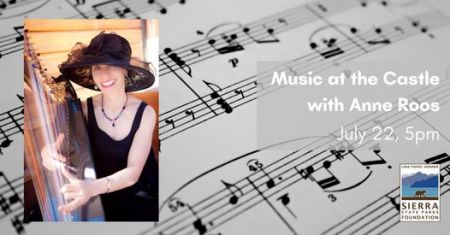 Anne Roos, a longtime Tahoe local, is the harpist on the 2015 GRAMMY® Award Winning Album, Winds of Samsara. She recorded music airs internationally and is described as “beautiful music” by United Airline Inflight Music Service, and has performed for dignitaries including the Lord Mayor of Dublin, Ireland. Anne Roos is considered at the top of her field as a Celtic Harpist. She is a many-faceted performer who loves surprising her audiences with a wide variety of music favorites that you might not expect to hear played on the Celtic harp.

Tickets include the wonderful opportunity to drive down into Emerald Bay. Seating is limited to 30 guests, a reservation is required.