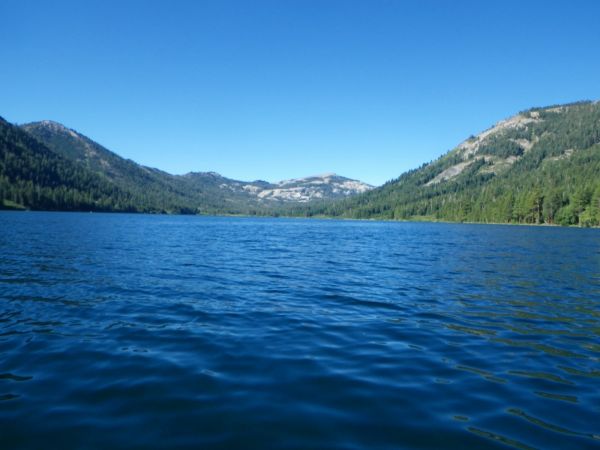 NOTE FOR THE WEEK:
COOLER MORNINGS and REASONABLE TEMPS DURING THE DAY ALONG WITH THUNDERSTORMS AND SHOWERS IN THE AFTERNOONS. SHOWERS FOR THE MEMORIAL DAY WEEKEND. NO STOCKINGS PLANNED FOR THIS WEEK AS OF MAY 20TH! The plan is to start stocking Pilot Peak Strain Cutthroats again this season in BOCA, STAMPEDE, DONNER, AND PROSSER RESERVOIRS with hopes that they will survive AND attain trophy sized proportions in the years to come. THIS MEANS AS AN ANGLER ONE SHOULDN’T BE KEEPING THESE SUB-CATCHABLE SIZE CUTTHROATS BUT PUTTING THEM BACK SO IN TWO YEARS THEY WILL ATTAIN SIZES SUCH AS 15-18 INCHES! YOU ARE STEWARDS OF THESE WATERSHEDS SO ACT LIKE IT FOR OTHERS TO ENJOY DOWN THE ROAD! Stocking from the DFG will hopefully be better this year and with the upcoming stocking of trout slated for Donner that will hold true.

WEATHER FOR THE WEEK:
LOW’S IN THE 40’S AND HIGHS GETTING INTO THE 60’S FOR THE WEEK WITH SCATTERED SHOWERS AND THUNDERSTORMS.

**DONNER:
STOCKED AND FISHING WELL! Trout have dispersed now and will be a little harder to locate but when you do their will be more. Boat launch is OPEN and larger boats can be launched now. The lake level is at 63% and holding steady. Reports of good Mack fishing for those who fish off the boat. Macks can be found at depth of 18-75 feet and most concentrations of these fish can be found around ledges and drop-offs. Mack that are closer to the shore right now are ranging from 2-5 pounds mostly and have been hitting small spoons such as Kastmasters, Krocodiles and larger spinners. Throw everything you have at the trout now, ie: powerbait, nightcrawlers, and salmon eggs and combinations of these baits, spoons and spinners of different varieties. By casting closer and then working your way out a little further one can detect what depth the trout are cruising and having patience is key to success now. Get a guide for this lake and learn the ropes! Guides listed on bottom of this page and all are highly recommended! This lake will be planted for the first time this year the week of 4/22/2018! *

**BOCA:
Holding steady as out-flows have INCREASED to 200 CFS below dam. Some people have been able to launch boats from the shore at the inlet. Kokanee fishing here is SPORADIC even though surface temps have risen to 55 degrees. STAMPEDE IS BETTER FOR KOKES! Fishermen will find most of the fish at the Dam or at the North end of the lake to the last riffle of the Little Truckee River (special regs exist here so read up on the rules). Great fishing for the Cutthroat and Rainbows from shore with the occasional Brown thrown in! Better fishing will be around the dam later in the day! With lower flows coming out of the LT fish will be less apt to venture up the river so one won’t find large concentrations of fish here. Access to the boat launch is not feasible. CAMPGROUND ON WEST SIDE OF LAKE IS CLOSED!

****STAMPEDE:
ACCESS TO BOAT LAUNCH IS WIDE OPEN! Lake is HOLDING at 92% even with flows being downgraded to 103CFS. Kokanee fishing is in full swing as of this weekend! Toplining is your best bet and concentrating around the Island and outside the inlets will produce the best results. Kokes caught have been ranging from 13-15 inches initially but some larger specimens are ready to be caught! Bite will continue into the late morning, but anglers need to realize that they will have to go deeper and use darker colors! Contrast is the key so don’t continue to use pinks, oranges and other bright colors later or you’ll get frustrated. With an aggressive stocking of Pilot Peak Strain Cutthroats over the next few years this lake hopefully will produce trophy sized Cutties such as those in Pyramid. When access opens finding trout from the shoreline can be hit or miss. Right time right place scenario! Not much on the Macks here as the theory is the population was depleted by random die offs during the drought years. Smallmouth Bass fishing can be good in the Davis Creek arm of the lake once temps are right. Hint, fish structure! THE ONLY WAY TO ACCESS CAMPGROUNDS AND BOAT LAUNCH IS BY TAKING 89 TO HOBART MILLS AND THEN THROUGH RUSSEL VALLEY VIA DOG VALLEY ROAD! CAMPGROUNDS ARE CLOSED!

*PROSSER:
ACCESS IS WIDE OPEN HERE, BUT FISHING HAS BEEN SLOW. LAKE HAS COME UP TO 45% CAPACITY AND CONTINUES TO COME UP BUT SLOOOWWLY. Lake is wide open, but fishing is hit or miss. Late stockings in the fall of 2017 could help though but hasn’t paid off yet. Since this lake hasn’t seen many stockings of fish over the past few years fishing may be slow until the DFW starts to plant it consistently this summer. There was a stocking of Cutthroat in the Fall of 2016 that were destined for Webber Lake and there have been reports of anglers catching these fish ranging from 14-20+ inches but they are few and far between with this put and take lake. Smallmouth bass have made a reappearance around the dam which can be fun for newbies and veteran anglers alike! The more pressure this lake receives the more difficult smallmouth will be to catch. They are like Carp and are very sensitive to angling pressure! One must change up their strategies on these fish if they are going to be successful. The plan is to start stocking Pilot Peak Strain Cutthroats this season with hopes that they will survive and attain trophy sized proportions in the years to come. THIS MEANS AS AN ANGLER ONE SHOULDN’T BE KEEPING THESE SUB-CATCHABLE SIZE CUTTHROATS BUT PUTTING THEM BACK SO IN TWO YEARS THEY WILL ATTAIN SIZES SUCH AS 15-18 INCHES! YOU ARE STEWARDS OF THESE WATERSHEDS SO ACT LIKE IT FOR OTHERS TO ENJOY DOWN THE ROAD.

**DAVIS LAKE:
WIDE OPEN! Some big Rainbows here but reports have been sporadic. Look for a good season here but only with increased plants by the DFW! 530-836-2589 AND ASK FOR MARK!

**FRENCHMANS:
WIDE OPEN! If you can get to Turkey Point it will be your best bet. Inflated nightcrawlers and powerbait working the best. For the Fly flingers midges suspended or on a slowwww retrieve. CONTACT OUR BLAIRSDEN STORE FOR FURTHER INFO! 530-836-2589 AND ASK FOR MARK!

**TRUCKEE RIVER
(GENERAL REG SECTION FROM TAHOE CITY TO TROUT CREEK): OPEN AS OF 4/28! Fish here now as later it will not be as productive due to lower warmer water. Small spinners and spoons for the gear person while drifting salmon eggs or nightcrawlers will work best for those who prefer bait.

*LITTLE TRUCKEE RIVER
(ABOVE STAMPEDE): OPEN AS OF 4/28! Same as the main Truckee but with less fish per square mile!

**JACKSON MEADOWS:
ROAD IS UNOFFICIALLY OPEN AND BOAT LAUNCH IS ACCESSIBLE ALSO. SMALL BOATS ONLY NOW AS THERE IS STILL AREAS OF SNOW ON ROAD, BUT IT WILL BE GONE SOONER THAN LATER! STOCKED TWICE IN OCTOBER, FINALLY! CHECK ROAD CONDITIONS REGULARLY NOW.

**PYRAMID LAKE
Season is winding down here as the warmer weather approaches. Good days and some not. Lots of fish cruising the shallows but half of those seem disinterested in eating. These cruisers are just out of eye sight so will be difficult to locate them. Indi fishing is the way to go for these guys and one can be rewarded with a 10+ lb Cuttie.